Where your conference fees go to

Fees for scientific conferences can be a cause for concern. Since most researchers are paid by public money, the question is whether this money is put well to use.  So where do your conference fees go?  Let me illustrate this on an example – the ISSTA conference I organized in 2016.

ISSTA is a nonprofit event, run by dozens of volunteers who run the conference as part of their paid job (or throw in extra hours for fun and honor); none of the researchers presenting, reviewing, or organizing make any profit from this.  ISSTA is run by ACM, which means that it covers losses but also gets any surplus; again, ACM is a nonprofit organization. 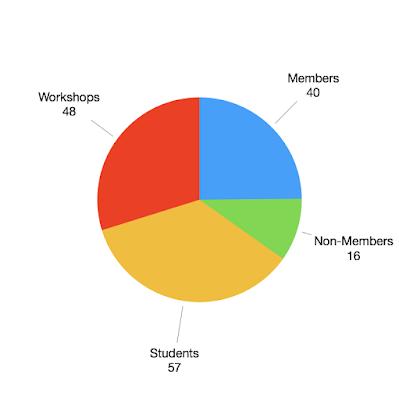 When setting up the budget, you make non-students subsidize students: At ISSTA 2016, an additional student would actually incur a small cost; but this would easily be covered by additional non-students coming in (especially when showing up on-site!).  We also got a small amount of donations; other conferences and conference chairs are much better at getting these.

Of course, you do not know how many people will attend, so you calculate conservatively – I estimated 100+ visitors for the main conference, and planned accordingly.  The key point in planning, though, is the expenses.  This is what the expenses for ISSTA 2016 eventually broke down to: 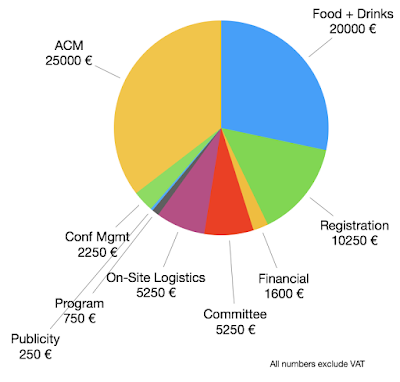 Starting clockwise at the top, the biggest category is food and drinks, including social events like reception and dinner.  We spent about 50€ per person and day, which is pretty reasonable for two full meals, coffee, drinks, snacks, and all.  We ran ISSTA at my university, meaning that we could buy drinks and snacks at retail price; if you run a conference at a hotel, you would be charged hotel prices, say $3 or more for each and every can of soft drink, and you don't want to know about beer or wine. Workshops at ISSTA 2016 had relatively high fees, but little cost (essentially coffee, cookies, and a light lunch), and thus brought in revenue.  All expenses also incur taxes – in our case, again 19% VAT.

The next big block is registration, which covers most of actually organizing and running the conference.  Most of this is the fee charged by the conference organization agency of my university. They run a few dozen conferences every year and are very well-organized: their fee includes organizing costs (the folks who answer your queries and write visa letters), university overhead, and more. This item also includes the staff on site – in our case, student aides who gave out bags, served drinks, handled your queries, or oversaw the AV – as well as free bus tickets for all attendees (rides from hotel to the conference venue and back).  Overall, I estimate that the agency saved me two months full time of planning and organizing, so contracting them was a great return on investment.

Financial refers to 2% credit card fees.  Depending on your country and your financial provider, these may vary considerably.

ISSTA features a physical meeting of the program committee – that is, all reviewers meet for two days to discuss which papers should be presented.  This contributes to the quality of the conference, but also is very expensive.  The reviewers have to assume their travel, and the conference pays for meeting rooms, day catering, and a dinner.  We co-located the PC meeting with the ICST 2016 conference in Chicago.  This attracted more attendees to ICST; in return, ICST subsidized the PC meeting from the extra revenue, keeping the cost low.  This item also includes invited speakers, for whom ISSTA 2016 covered travel expenses as well as free conference and workshop tickets.

On-site logistics primarily refers to meeting rooms. These can be expensive, depending on the venue.  My university has reasonable prices for scientific meetings, including all technical equipment. Hotels often offer meeting rooms for free if you bring in sufficiently many guests, but then they may charge you for extras such as AV or Wi-Fi – and the rental of a single AV system can easily exceed the cost of an entire meeting room at the university.

The program needs to be printed; for publicity, we distributed leaflets at conferences and otherwise used free Facebook and Twitter channels. Other conferences would throw in paid advertising and throw in extras such as the proceedings on a USB stick.  ISSTA gave you a linen bag and an online access code for the proceedings.

Conference management refers to services around the conference, notably Proceedings, the cost of editing the accepted papers and making sure they all end up in the digital library, all properly tagged; as well as the Conference Management System, which handles submissions and the review process.  We used specialized services for both, again at reasonable cost.

Low cost and high attendance, especially at workshops, gave ISSTA 2016 a high surplus of 25,000€ – which all went to ACM such that ACM and SIGSOFT could keep on organizing and supporting research in our field.  Note, though, that such a surplus is not the rule.  You are supposed to plan for some contingency and overhead, but most conferences have a much smaller surplus. Despite best efforts of conference organizers, some conferences come up with a loss that would then be covered by the sponsoring society.  With ISSTA 2016, we were lucky – and if you ever go and organize a conference, I wish you the same luck, too!